The Scottish Traditional Boat Festival returned to Portsoy in June with its first live festival since 2019. Below we hear from Richard Thorne, Development Manager for Portsoy Community Enterprise, about the challenges of returning to a live festival, how momentum was kept going via a virtual festival held in 2021 and look ahead to the festival’s 30th anniversary in 2023. We also hear about the changes that have been made to make the festival more sustainable and how digital technology is helping them reach wider audiences and deliver a more interactive festival.

Richard has worked in community development for 10 years, previously working for the Mull and Iona Community Trust, and joined Portsoy Community Enterprise (PCE) in 2020. PCE is a social enterprise aimed at providing economic benefit from tourism for the town of Portsoy and surrounding area and operates the Salmon Bothy, the Boatshed, Portsoy Links Caravan Park and the Sail Loft, as well as running the annual Scottish Traditional Boat Festival.

Can you tell us what it’s been like to return to hosting the first live festival since 2019?

It takes such a long time to organise that it wasn't exactly a surprise to people that it was coming. We did try to do a physical festival last year – we mistakenly thought that if there was a vaccine out in December it will all be over by June and it’ll be fine, however by April it became obvious it was never going to happen, which is why we went with the virtual festival last year.

This year it was all systems go, but the spectre of Covid was still there, and in a town with a fairly elderly demographic, the fear was still definitely there. Previous festivals have attracted 16,000 people, so when you announce that the festival is back, with the prospect of 16,000 people coming to a small town, the initial reaction wasn’t entirely positive. However, once we explained that we were consolidating and moving the festival out of town, as time went on the vast majority were really positive, really happy and really looking forward to it. It did mean that volunteers were slightly trickier to get hold of, but overall, it was really well received.

Also, because everybody decided to start doing live events again, pretty much at the same time, getting hold of businesses, exhibitors and participants was trickier. I think we expected there to be a flood of interest and people to say, “yay, you’re back on, please can we come”; instead there was some hesitancy.

But on the whole, everybody loved it. We’re glad we held the virtual festival, just so people didn’t completely forget about it. It was June 2019 when we held the previous one, because we lost 2020 completely, so in effect it was three years since the festival had last taken place. There was a lot to worry about, a lot to do. People say the world has changed in those three years, and they’re right, a whole lot had changed – the wishes of people had changed, the opinions of people had changed – so there was a lot to take into consideration.

Is there anything that you did differently this year compared to pre-2020?

We decided that, because the festival takes over the town and it’s all residential housing around it, we would aim for slightly lower numbers than the festival would usually attract. But even then, with the spectre of Covid, people were hesitant about strangers milling about in the middle of town, so we pulled it out of town and relocated it down to the waterfront so it would be purely in one area running along the sea front, and this worked very well practically. We kept the whole event slightly smaller than it had been in the past, expecting numbers to be to be slightly down, and they were. The idea of this year was a consolidation event. The effort was to bring it back to see how it was received and to allay any fears that local people had, and from that point of view it succeeded.

From a business point of view, times were tougher, so funding was quite difficult. We made the decision to keep prices down for all the exhibitors, community groups, traders etc, especially the charities. We didn't want cost to be an issue for people, so we wanted to keep costs down to what they were in 2019, despite everything rocketing. We managed to find some external funding that enabled us to keep those costs down for all the exhibitors and to keep the entry fees the same as they were in 2019.

Climate change has become much more of thing than it was before. Traditionally, we would produce this beautiful 54-page colour printed souvenir brochure, which cost us a fortune, and the majority were well read during the weekend but after that nobody really cared, so we made this much more of a digital thing. Everything moved online, so the website was much more heavily used this year. There was a whole lot more stuff to be downloaded, registration was paperless, and the brochure became an A3 folded sheet with a map and timetable. We made the whole event much more interactive – we had a digital screen signposting what was going on and where, with videos of what had gone on previously, what was coming up, and on the Sunday we could recap on what happened on the Saturday, so it was like a living program as much as anything.

There was also much more interest in recycling. We put a put a ban on single use packaging for all of the exhibitors and traders and that went down fairly well. We'd recently got funding for a water bottle refill station and that was really busy as well. All this stuff was starting to gain momentum in 2019, but it was nothing like it was for this year.

Have you seen a difference in visitor profile?

It's always been a very popular event for this particular corner of the northeast, of Aberdeenshire and Scotland in general, but we advertised it and promoted it wider this year in a digital way. We promoted it on a wider area of local radio stations, we targeted specialist publications and we were able to get coverage, and even a small amount of international coverage. The event itself wasn't international in that we didn't have people coming from different countries. Traditionally, we’ve had Vikings come down from Shetland and we’ve had delegations from Latvia, Estonia and Norway. Again, this year, we didn't do that, really just because we weren't sure at the start whether they would be allowed and how welcome they would be, as well as all sorts of other resourcing issues. So, there wasn't the international coverage and flavour of the event, but we were very encouraged to see quite a good number of international visitors who were either on holiday in Scotland or in the area, or had interest in particular things that were going on. We certainly had a good draw from the rest of Scotland and further away. Primarily it has moved slightly from very much a North-east Scotland event, with delegations coming from visiting countries, to more of a general spread, which we thought was really good and we will build on that for next year.

It sounds like you have been embracing digital and it has been having a positive impact on the festival. Can you tell us a bit more about that?

2019 was a long time ago and the whole market has changed. There was a split opinion on the subject of abandoning the printed programme. The initial reaction was “we can’t, we’ve always had a program, people like the programme”, but they don’t keep the programme – people look at it, they appreciate it, they may read it – and some may read it very thoroughly – but it still ends up in the recycling or the bin. We learned from the virtual festival that people keep coming back – it’s still available online and people are still watching it, so we knew that digital had a lasting effect. We spoke to our sponsors and they really weren't interested in printed material at all, and we asked a lot of the people who advertised in the original programme and they were more than happy to go digital. They were just happy to see the event back and be able to support it in some way. 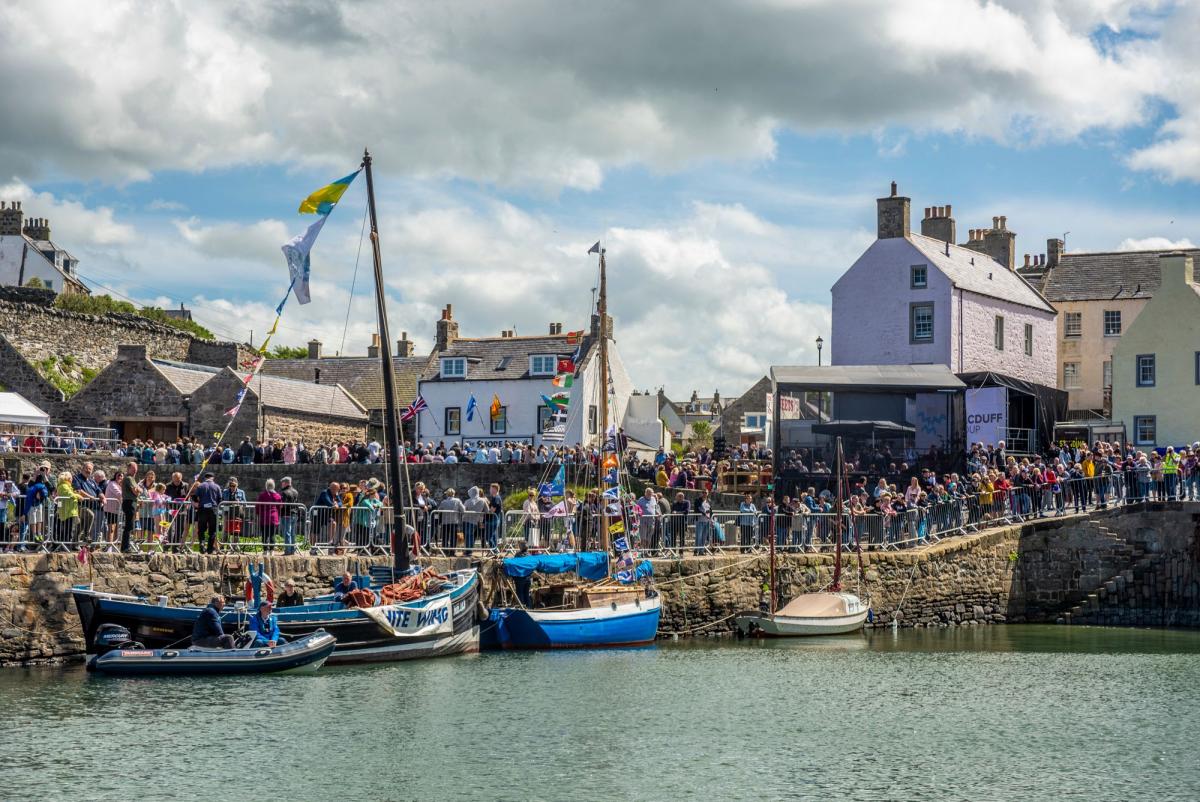 Are there any plans to further expand or enhance the festival in future years?

2023 is the 30th anniversary of the of the Scottish Traditional Boat Festival, so this year was the warmup act. I'm not saying it’s going to be vast; we're just going to do what we did this year significantly better. Because it was a whole new layout, we learned a lot from feedback from people who either really liked it or really hated it, so there are areas to improve. So, we're taking what we did this year and just making it better.

We spread everything out for this year, so we can bring it in a little bit. We had lots of small artisan food producers who wanted to come that we couldn’t accommodate, but we’ve got the space now that we can add to marquees and improve the offerings and setup within the marquees.

The boat side of things is where we really want to improve. During 2020-21 there was funding available for the traditional boats to make changes, repairs, servicing etc, so I won’t say we struggled, but there just weren’t the boats out there in a seaworthy state for this year. We’re already looking for traditional boats to come for 2023, so there will be more older boats in the harbour.

There will be more harbour activities. We had a very successful raft race this year – there’s always been a raft race, but this year it really did very well. We normally have 2-3 teams get involved, and this year we had half a dozen teams. It was a riot! We’re also going to build on the success of the digital screen and make the festival even more interactive than it was this year.

Do you have any final words of advice to share with other event organisers planning a return to live events?

It's probably the same advice that people give whether you've done it before or not – you keep going. Don't take no for an answer. Be prepared to nag. Listen to the wishes of the community you're involved with and make the town feel involved in what you're doing. Take time to enjoy what you've achieved. I know I spent so much time organising it and getting it up and running, and on the Saturday charging about making sure everything's working, and it was only on the Sunday that I actually had time to sit back and visit the whole event and think, actually this is pretty damn good! Unless you really pull yourself back and say – right stop you have 5 minutes, 20 minutes if you're lucky, enjoy it – you just get so blinkered and targeted that you don't enjoy your own event and surely the idea of putting on an event is because you enjoy it. So, my advice would be you need to have broad shoulders and the skin of a rhinoceros, but also take time to enjoy what you've achieved.

Receive up to date information about our activity, training events, key industry dates and more.